Hungry for land: small farmers feed the world with less than a quarter of all farmland 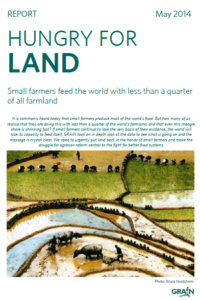 GRAIN took an in depth look at the data to see what is going on and the message is crystal clear. We need to urgently put land back in the hands of small farmers and make the struggle for agrarian reform central to the fight for better food systems.

Read the joint media release of Grain and La Via Campesina

Press Release, 17 April- Fuerteventura. From 15th to 17th April, ECVC, a European association of small-farmers that brings together 27 farming bodies from 17 countries across Europe, including outside the EU, held its annual General Assembly in the Canary Islands, Spain. One of the Outermost Regions of the European Union, it is not only where Rafael Hernandez, president of Coag Canarias and outgoing member of the management team, grows his crops but also where Mario Cabrera Gonzales, President of the Government of the Island of Fuerteventura, has declared his intention to develop food sovereignty by promoting local production and autonomy.

This is a goal shared by ECVC, and represents a real challenge at a time when the CAP, currently under reform, has come under attack from agribusiness and defenders of major European farming, who are opposed to any change. The CAP offers little hope to the organisations represented by ECVC despite their considerable contribution to the institutional debate, aimed at defending small and medium-scale farmers, the majority of whom are based in the EU. Poverty and unemployment is exacting a rising toll on citizens as a result of the European crisis, which starkly demonstrates the limits of the liberal dogma at work. We must stop destroying farming jobs and instead enable more rural businesses. Achieving access to quality food for all in Europe requires a large number of farms, sustainable production methods and a physical shift in food supply chains.

Rather than long speeches and matters of protocol, a series of lively debates allowed setting the following strategic axes for the the organisation’s activities over the year ahead :

• Promoting agroecology – which values farmers’ specialist knowledge and contains far more than agronomic techniques – by ensuring that this term is not taken over and robbed of its social aspects.

• Strengthening the Food Sovereignty movement (already composed of many different organisations following the 2011 Forum in Austria) which is working with small-farmers’ organisations to change food supply systems and release them from the stranglehold of the agro-industrial food model that is harmful to our health, the environment and the livelihoods of farmers, as well as the vitality of rural areas. This touches on a number of policy areas such as those relating to trade, where “free” trade agreements threaten the survival of family-based producers.

• Offering support to small- and medium-farmers on all levels, in particular by combating land grabs – which also affect Europe – and supporting rules and regulations that are accessible to small structures (rather than decimating them), by creating suitable channels for the sale of their produce and protecting the use and exchange of traditional small-farming seeds.

The vibrant assembly, which included many young farmers, elected 5 men and 5 women to the coordinating committee, who will take the project forward. Another step forward will be the year for Family Farming, which the UN has declared for 2014, when European Coordination Via Campesina will champion the values and demands of millions of small-farmers who are Family Farming.

An open debate, in the presence of a member of the European Commission and the President of the Government of the Island of Fuerteventura, highlights the future of small farms. In the words of Javier Sanchez, a representative of the ECVC, “We must show that it is we, the farmers, who feed our fellow citizens – and we have the right to receive fair prices and a decent income”. The AG is dedicated to all the victims of peasant struggles.